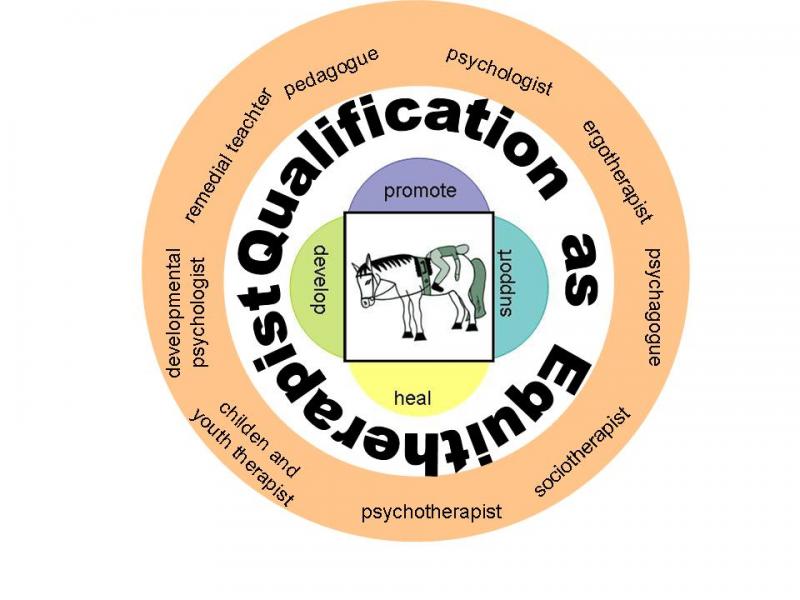 Equine assisted remedial education can be provided individually or as a group activity. The aim is to integrate psychosocial and cognitive elements. In addition to the aspects relating to general development the exercises and interventions are also specifically tailored to the age and the resources of the individual children and the group. This form of equitherapy is based on Antonius Kröger's approach to remedial vaulting, though it has since 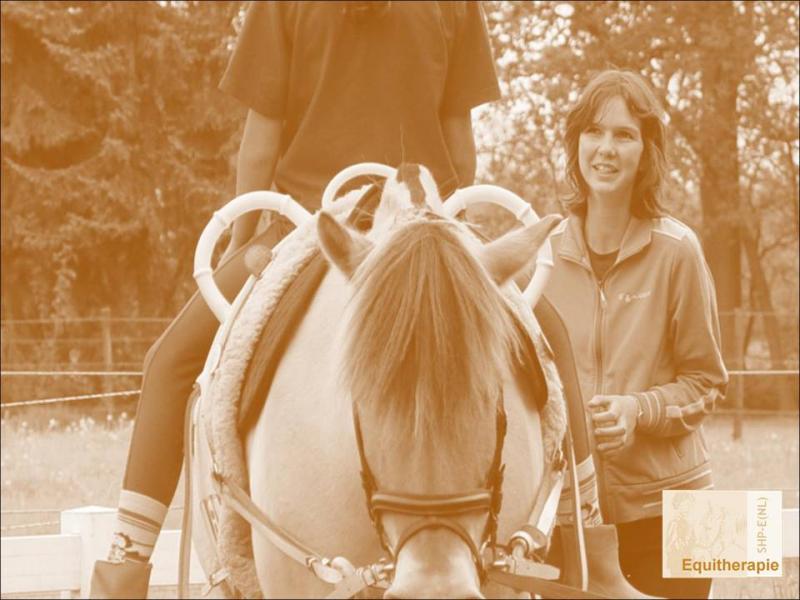 continued to develop and has become more distinctive. The measures are primarily aimed at children and adolescents of 6 to about 18 years. In certain cases pedagogic support of this type can also be provided to (possibly disabled) adults. In vaulting the client does not ride independently by guiding the horse with reins. The horse is guided by the therapist via the lunge, though it can to a certain extent react to what the client is doing. The clients practice "gymnastics and carry out vaulting and other exercises and games with and on the horse. Unlike vaulting as an equestrian sport, remedial vaulting is not geared towards achieving the best possible gymnastics performance when carrying out an exercise. The aim is for the client to develop his abilities (in the context of psychomotor support) and to experience alternative courses of action. Furthermore the client's experience of himself, his abilities and also his boundaries is addressed through physical movement with and on the horse. This will lead him to a realistic self-evaluation. Also central is the development of the client's social communication skills. In line with Kröger's original approach the equitherapist should strive to activate and shape a lasting relationship dialogue between horse and client within the communication triangle. For this the dialogue between therapist and horse should serve as a model for the client. The dialogue between therapist and client should be utilized as sparingly as possible by the equitherapist, to prevent his attention from interfering with the dialogue 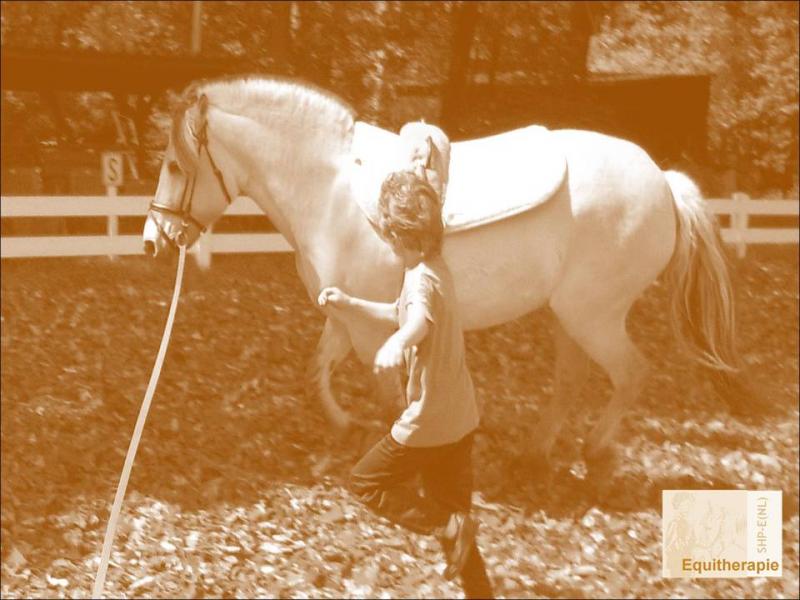 between horse and client. The SHP model of equitherapy also allows for a relationship between therapist and client. Despite the therapist's empathy and emotional attachment to client and horse respectively, the relationship between him and the client must not disrupt or interrupt the client's experience of his movement and relationship dialogue with the horse, but should strengthen it. For Antonius Kröger the objective of remedial vaulting was to promote communication skills and the capacity to act, as prerequisites for building sustainable relationships (Kröger 1997). According to Kröger children and adolescents who are offered remedial vaulting to support their personal development often suffer from the socially conspicuous symptoms of insecurity. For this reason he added the following individual objectives: (1) dealing with fear and aggression, (2) help with learning to trust the equitherapist and oneself, (3) experiencing and differentiating feelings, (4) harmonizing motor skills through sensorimotor training, (5) heightening perception sensitivity by activating sensory integration, (6) generally raising motivation by promoting assured self esteem, (7) learning to conduct reality-based self-evaluation and finally (8) autonomous orientation instead of external orientation.

Equine assisted rehabilitation in the context of equitherapy is not intended as physiotherapy or hippotherapy, where the primary or exclusive aim is to restore the client's abilities to the same level as previous to the trauma or illness. Rehabilitation with the help of the horse can be carried out by equitherapists whose primary profession is that of ergotherapist, psychomotility therapist, clinical, social or occupational psychologist, 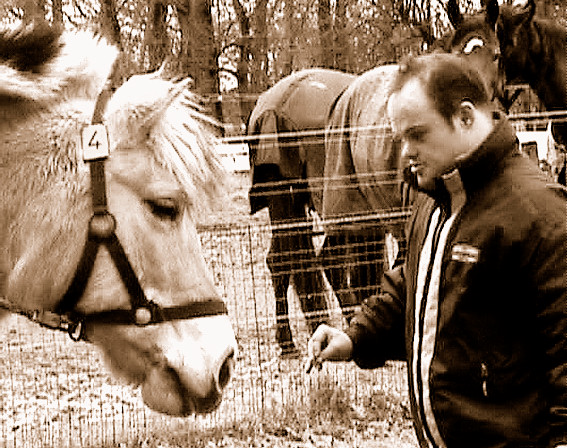 neuropsychologist and also psychotherapist. Equine assisted rehabilitation  as a form of equitherapy  is aimed at processing the trauma of the (current or permanent) disability and at working on the client's self-perception, confidence and acceptance of impaired performance. A further aim is the development of resources to help compensate for the impairment and accept it emotionally. Work can be carried out individually, but also in (integrated) groups. Suitable vaulting exercises are sensorimotor and psychomotor exercises, as well as self-awareness exercises. Rehabilitation can thus be interpreted as a mixture between psychomotility support and psychosocial support (in some cases also including psychotherapy). The role of the horse is that of the motivator. Through the movement dialogue with the horse, being accepted within the relationship and achieving balance despite disability, other rehabilitation measures can be supported  especially psychological and psychosocial measures. SHP recommends that its therapists who wish to work in the field of rehabilitation with clients with more significant disabilities obtain an additional qualification as riding instructor for the disabled.

To date, in German speaking Europe a qualification for equine assisted work with adults in the pedagogic and psychotherapeutic field has for the 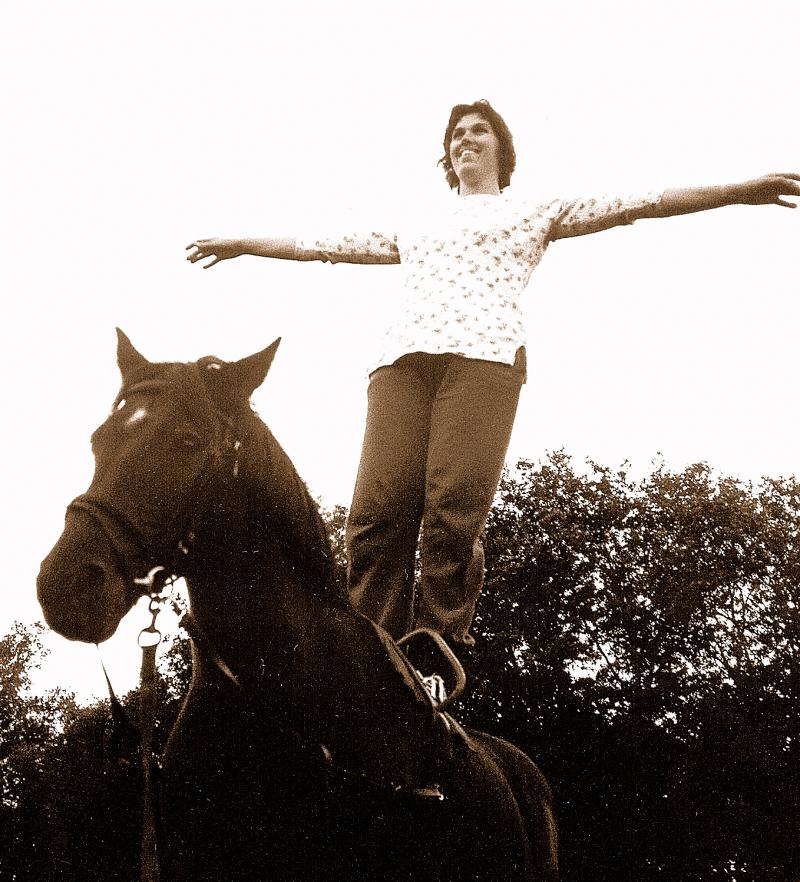 most part only been possible via the detour of a qualification in remedial vaulting for children and adolescents. Equine assisted psychotherapy for adults developed out of a combination of therapeutic work in the field of remedial education and the therapist's own professional background as psychotherapist. That is also what occurred in my case. Psychomotor therapeutic vaulting (PMTV), as we practice it, developed on the back of my qualification in therapeutic riding (remedial vaulting/riding OEKThR10) and my basis in developmental psychology and psychotherapy, which stems from my work as a client centred (Rogers) and body oriented psychotherapist (PBSP Pesso-Boyden-System psychomotor therapy). The need for equine assisted sociotherapeutic and pedagogic work with adults was also registered in settings where sociotherapists or ergotherapists were providing treatment. Their interest in equine mediated therapies has led to the development of PSMV (psychosocial-motor therapeutic vaulting). Both methods have proved successful in the past 15 years and, as part of the Dutch qualification for therapeutic riding SHP-E(NL) they are now also passed on to students of equitherapy as possible forms of equitherapy. 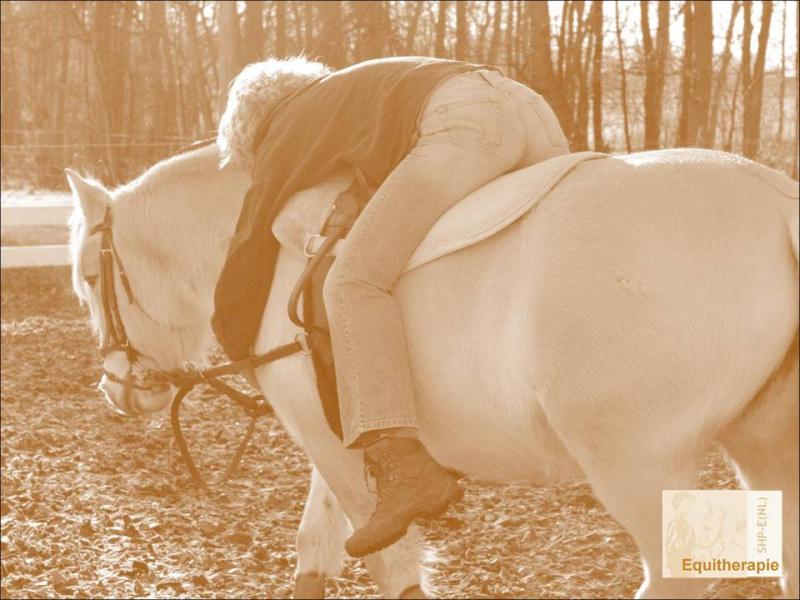 adolescents and adults. It is based on the assumption that the client has needs which have not been and are not being (sufficiently) met in the context of life so far, and that he has experienced conflicts or trauma which now need to be addressed within the therapeutic triangle of horse-client-therapist. The work can be of a psychotherapeutic orientation, but can also take the form of a psychosocial support measure, without psychotherapy having been indicated (or in support of psychotherapy without the horse). As with pedagogic work, psychosocial and psychotherapeutic work should not centre on the problem but should instead be seen as a holistic measure. Its purpose is not to highlight deficits, but instead, by building on the client's strengths and possibilities, to support him in seeing and experiencing more than he already knows about himself. On the horse, in an elevated position, this is also more easily achieved in the practical sense. The aim is for the client to realistically assess his capabilities and boundaries, and to learn to appreciate them. This takes place in an atmosphere of security, which should also act as invitation and motivation to venture forth on the journey of discovery of one's own body and the interaction with others. It is based on a "possibility sphere  a state of discovering possibilities. Via the relationship which the client has with the horse, the therapist and perhaps other participants, he feels able to have positive and also painful experiences, and to integrate them into his picture himself and the world. This leads to a new definition of himself in interaction with the world. The way in which this world and the own personality are perceived then also reveals new ways to act. At the same time any longing to regressively satisfy the need for being carried and supported can have its place and can be met with the horse in the "here and now. 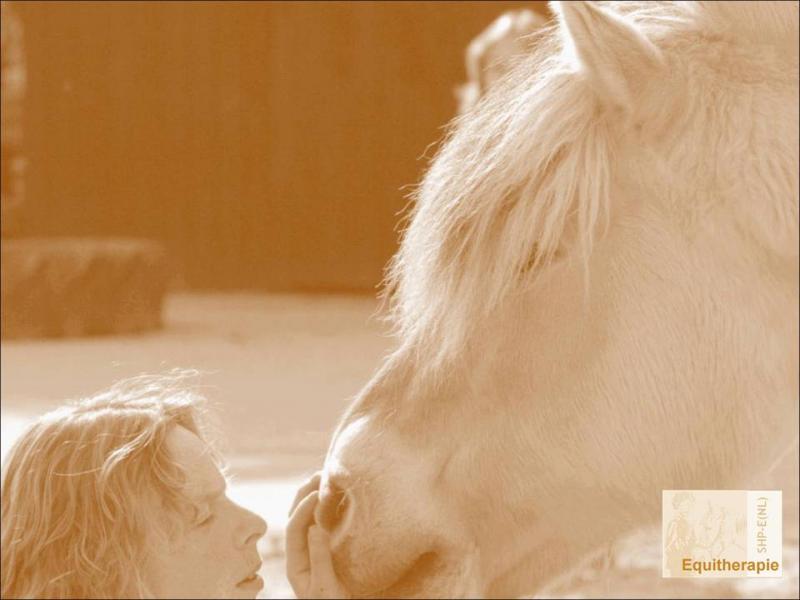 Compared to forms of therapy that are not supported by the horse, equine assistedpsychotherapeutic processes are generally more intensive and are often also far quicker to reach the depth at which processing occurs. The horse helps and supports the therapist in many ways. It not only acts as a type of catalyst, it also enables the therapist to gain a better insight into the energetic processes of the client, and thus to operate more purposefully in his interventions. In comparison to pedagogic vaulting, psychotherapeutic vaulting/riding presents an additional hurdle.